Mock Trial 2021: Pivoting in the Midst of a Pandemic

When Sarah Teague came to my house in the middle of lockdown with the news that I was chosen to be mock trial captain for the upcoming school year, I never could have predicted just how different this mock trial season would look. I spent all summer planning, but when the school year started, I was told that we would need to press pause on mock trial in order to focus on just making it through the first quarter, which made sense but was still a bit worrisome, especially because we had not heard from the Tennessee Bar Association over whether we would even be having a mock trial competition this year because of COVID. However, as soon as I received news that we would be having a competition I jumped right in with interest meetings and planning auditions. During the week of auditions, we received word that the competition would be virtual, and, honestly, at first I panicked but then thankfully Mr. Kinney and Coach Davis provided wise advice and remained calm and encouraging, which was exactly what I needed. We did not know exactly how it all would look. All we knew then was that we would not be at the courthouse.

Auditions came and went and the 7AM practices started. Due to the new bell schedule, we no longer had a choice period where the mock trial team could meet, so students sacrificed some sleep and got to school at 7 AM two days a week in order to make sure we were able to get in as much prep as possible for the upcoming season. During Thanksgiving break, the new case came out… well… the old case I should say. The TBA informed all the participating mock trial teams that we would be using the same case that we used last year, which involved someone named Bryson swallowing a screw that was in a chicken sandwich. There were several pros to doing the same case again, but ultimately the team was disappointed to hear that we would not be presented with a new challenging case, especially because this year we were supposed to get a criminal case, which is our favorite!

After Thanksgiving break we continued practices on Wednesdays, Thursdays, and Saturdays and patiently awaited news from the TBA with more details as to how trial week would look. The next bundle of information the mock trial team received informed us that trial week had turned into trial weekend, and we would all have to compete in separate rooms rather than all together. Another unexpected curve ball. Despite this news, we adjusted our practices to fit this format, and, as Mr. Kinney told me repeatedly to do, we pressed on.

Then, the week of trial came… and so did the snow (SNOW BALL!). Trapped in our houses, the mock trial team practiced each morning over zoom while we counted down the days until Friday, February 19, when competition started. Friday came, and we competed from our bedrooms and prepared and debriefed over zoom. The same was done for both trials on Saturday. I can easily say that the mock trial team members are zoom pros at this point, especially considering we spent a total of around 11 hours on zoom on the Saturday of trial weekend.

Despite the endless curve balls thrown, directions switched, and meeting plans changed, I was still incredibly impressed with how our teams performed. Not only did our Westminster 1 team place third in the west division, we also had three individual awards presented to Lily Teague, Lizzie Laughlin, and myself.

While this season looked completely different from any past seasons, it was still one of the best experiences of my high school career. I love a good challenge, and trying to navigate through this season and lead the best that I can was definitely just that. Making this mock trial season possible in the middle of a pandemic took dedication and hard work from everyone involved, and I could not be more grateful for our coaches, helpers, parents, and team. 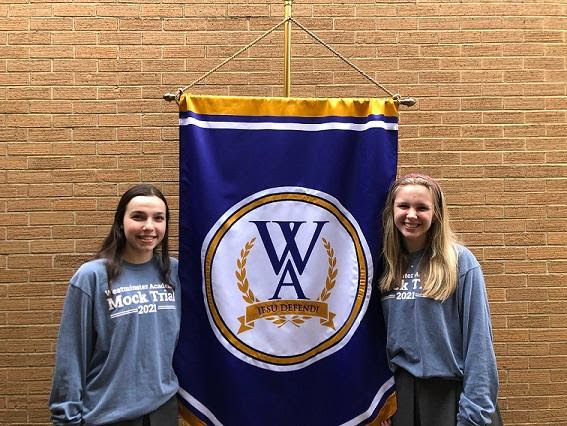 Mock Trial 2021: Pivoting in the Midst of a Pandemic
Westminster Academy Senior William Bell Signs to Play Soccer at University of Indianapolis
The Legacy of St. Boniface at Westminster Academy
Athanasius House Wins 2020 Namesake Rhetoric Challenge
In Defense Of Memorization