The Legacy of St. Boniface at Westminster Academy 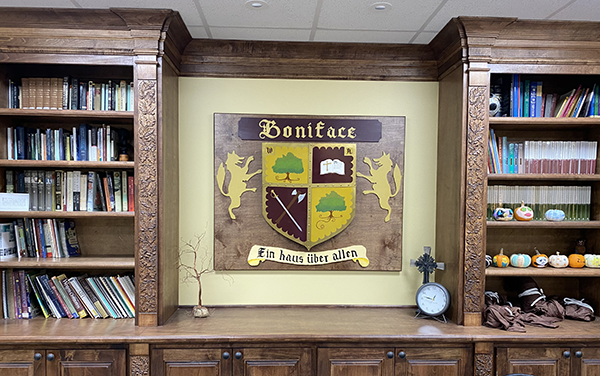 Boniface House at Westminster Academy is named after the 7th-8th century English missionary to Frisia and Germany, whose faithful service laid a foundation for the Church in that region and would earn him the title “the Apostle of Germany.”  Boniface is perhaps most famous for his miraculous felling of an enormous oak tree dedicated to Thor with a single blow and a providential gust of wind, an act which demonstrated  the sovereignty of the Lord and the powerlessness of idols.  Afterwards, he worked for years in this region to build the Church, ceaselessly seeking converts and furthering God’s kingdom significantly, but eventually, he was martyred during an attack by local bandits.  Through decades of faithful service, the Lord used St. Boniface’s life to plant the Gospel in Germany and the Netherlands, which would later bloom into a mighty legacy of faith.

Last spring, when the time came to update the Boniface House room, we sought to honor our namesake by creating a beautiful room that would encapsulate the remarkable life of this godly man and, by doing so, would point our students to Christ.  To serve as a centerpiece of

the room, we commissioned two large-scale manuscripts to reflect a lesser known side of Boniface: that of the teacher and scholar.  Boniface, who was born with the name Wynfreth and only later would be granted the title Boniface by Pope Gregory II, did not receive a call to the mission field until he was over forty years old.  Up to that point, he had chosen to enter monastic life as a child, showed prodigious aptitude in his studies, and returned the gift of his upbringing by becoming a teacher himself, instructing youth in scripture, theology, and the Latin language.  Wynfreth became a widely sought teacher in England, as well as a poet, and he was known for his wisdom, humility, and gentle yet rigorous manner in the lecture hall.  He had dedicated his life to serving the Lord through pouring into young men and women, and by all accounts had no plans for missionary work abroad until much later.   To ignore this era of his life would be to ignore what shaped him into a courageous and loving missionary.

From this side of his life, we drew inspiration for our manuscripts.  One of the pieces was an easy choice; before every house meeting, the students and faculty pray aloud together a prayer attributed to Boniface, which reads as follows:

Eternal God, the refuge and help of all your children, we praise you for all you have given us, for all you have done for us, for all that you are to us. In our weakness you are strength, in our darkness, you are light, in our sorrow, you are comfort and peace.  We cannot number your blessings, we cannot declare your love; for all your blessings, we bless you.  May we live as in your presence and love the things that you love and serve you in our daily lives, through Jesus Christ our Lord. Amen.

This prayer reflects a man who truly rested in the sovereignty and goodness of the Lord. Wherever he found himself, whether in a classroom in England or on the road in Germany, he demonstrated gratefulness for the Lord’s many blessings.  He ventured into an unknown, hostile land, secure in the work of his Redeemer and Comforter to the very end of his life, even when faced with a violent death.  In response to God’s unceasing love for the world, he poured out his life in service to those around him, even those who hated him.  This is the kind of faithfulness and selflessness which we seek to instill in our students in Boniface House.  Through weekly communal prayer of this message, we bind to our hearts the truth and the hope that were the foundation of Boniface’s life.

In addition to the prayer itself, our manuscript includes illumination to encompass the

symbols and imagery of our house.  Boniface, modeled after various statues and stained glass depictions of the saint, looks directly at viewers, presenting us images of his life.   At his feet lie the stump and axe, representing the fallen tree of Thor, the lumber from which he used to build a church for his ministry.  In addition, he bears in his left hand the crosier, a symbol of his role as archbishop and his leadership of the budding church in Germany.  In his right hand, Boniface bears a Bible impaled with a sword. It was told by a witness of Boniface’s death that he refused to allow any harm to come to his attackers and simply held up the scriptures as his only defense against the oncoming blows. This account was confirmed by a book found after the attack, covered in slashes and cuts from a blade. Thus, the sword-pierced Bible became a symbol of his martyrdom and mercy.  Beneath Boniface lies a twirl of oak leaves and acorns, once again recalling the fallen tree of Thor and the seeds of faith that he planted in the heart of Europe.  Interwoven with these leaves are other symbols of Boniface, including the red and white emblem of the Archbishop of Mainz, a seat created for and first held by Boniface. Viewers also see the mascot of our house, the fox. This animal was chosen due its common presence in Germany’s landscape and folklore, as well as its association with wit and intelligence, much like our namesake.

For the second manuscript, we chose one of the most unique pieces in Boniface’s body of work.  This poem, written as the prefatory dedication for Boniface’s treatise on Latin grammar and poetry, reveals his devotion to the art of teaching. It was crafted in such a way that it creates acrostics on both sides of the page and in the shape of a diamond across the whole poem, which themselves constitute a secondary poem within this work.  In addition, at the very center of the poem, he has orchestrated the letters to read “Iesus Xristus” vertically and horizontally in the shape of the cross.  It should also be noted that the first half of the poem is written in elegiac couplets, a fairly common meter for medieval poetry used for various genres; however, once Christ is mentioned by the name, the poem shifts to dactylic hexameter, the meter of epics, to signify the presence of the world’s true hero.  The time, effort, and skill required not only to write in two different meters but also to form multiple acrostics, which are their own metrical poem, show the brilliance of this man.

However, the message is why this work was chosen for our house room.  The poem opens with a call to Boniface’s pupils to plant themselves in scripture and take up worship eagerly, because the Lord reigns even in the midst of a broken world.  Furthermore, he reminds readers of the blessed assurance of eternal life for the faithful due to the incarnation, death, and resurrection of Christ, who serves as the literal center of the poem.  The second half of the poem pours forth praise to our merciful King and culminates with a prayer for blessing, as our poet asks the Lord to attune his pupils’ hearts to the Gospel through his teaching.  Additionally, the poem in the acrostic is the actual dedication of the book to a beloved former pupil, Duddo, who was a faithful student and would maintain a close friendship with Boniface for years, as evidenced by correspondence between the two while Boniface was in Germany.

In addition to being a remarkable demonstration of literary skill, this poem stands in our house room as a reminder to both students and faculty of our calling.  Whether we teach Latin, theology, science, or math, the poem calls teachers to glorify God by rooting our students in the truth and hope of the Gospel.  Furthermore, this poem is a direct exhortation to students to seek the Lord in scriptural study and musical worship, and it was notably dedicated to a model student who did so, not by merely enduring under the demands of the work but by eagerly walking alongside his teacher.  This poem and the prayer hang in our house room to encourage us to take up our calling, whatever that might be, while resting in the promises and goodness of our Lord, just as Boniface did.